Despite Downtrend, Bitcoin Continues To Flow Out Of Exchanges


Data shows exchanges have observed large amounts of Bitcoin leaving exchanges in the year 2022 so far, despite the downtrend the crypto has experienced.

Bitcoin All Exchanges Netflow Has Been Negative During Recent Months

As per the latest weekly report from Arcane Research, BTC saw the highest outflows in June since the November of last year.

The “exchange netflow” is an indicator that measures the net amount of Bitcoin moving into or flowing out of wallets of all exchanges. The metric’s value is simply calculated by taking the difference between the inflows and the outflows.

When the value of this indicator is negative, it means a net number of coins are leaving centralized exchange wallets right now. Such a trend, when prolonged, may prove to be bullish for the crypto’s price as it can be a sign of accumulation from investors.

On the other hand, values of the metric greater than zero imply holders are depositing a net amount of BTC to exchanges at the moment. If these inflows are for selling purposes, then the trend can have a bearish effect on the coin’s value.

Now, here is a chart that shows the trend in the Bitcoin exchange netflow for each month of the year so far: 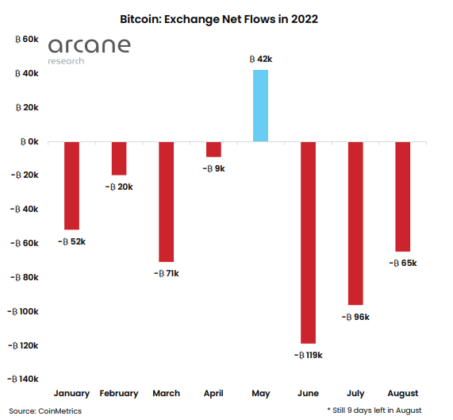 As you can see in the above graph, exchanges saw a decent amount of net Bitcoin outflows during the period of Jan to April, but in May the trend flipped.

May saw a significant number of coins enter into exchange wallets, but these inflows didn’t last too long. The LUNA crash that took place at the end of that month lead to a collapse of many of the biggest lenders and exchanges in the crypto market.

July and the month of August so far have carried on with the trend, observing pretty large net outflows (although not as big as June’s).

The report notes that the latest Bitcoin outflows suggest that trust around centralized lenders and exchanges is lower now among crypto hodlers.

At the time of writing, Bitcoin’s price floats around $21.6k, down 8% in the past seven days.