Energy Costs Are An Increasing Concern For Cash-Strapped Bitcoin Miners


Bitcoin miners have been having one of the worst go at it since the price decline of BTC. They have had to watch their revenues plummet to yearly lows after having an incredible year in 2021. In light of this, bitcoin miners have to look at ways to cut down costs as much as possible. The most obvious way that they can reduce costs is by cutting down their electricity costs, which is one of the major expenses for a miner.

Now, the mining of bitcoin is directly tied in with electricity. Being a proof of work network, miners need to factor in their electricity costs to determine their revenues directly and, by extension, their profit margins. As the price of BTC has fallen, so has the revenue for miners, and finding cheaper electricity is one of the best ways to increase profit margins.

Back in 2021, miners were seeing revenues of $500 per MWh of energy that was used in an energy-efficient Antminer S19. However, this figure has dropped to less than half of its 2021 numbers as the price of bitcoin is trending in the low $21,000s.

To keep up with a good profit margin, finding cheaper electricity is in the best interest of miners. So say a miner was paying $40 per MWh for a mining machine back in 2021 and seeing revenues of $500, that means their profit margin was $460, so $1,1150. To maintain such margins, the miner would have to reduce electricity costs by about half to around $20. 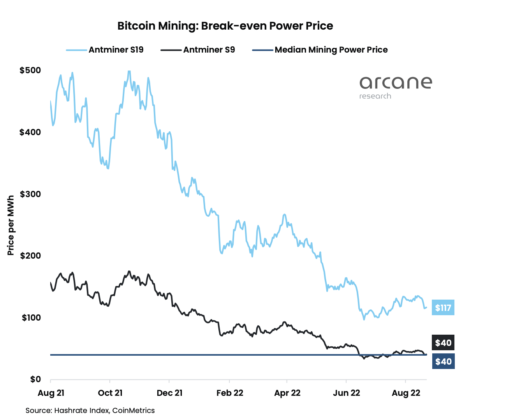 This search for cheaper energy options had seen miners move into countries such as Russia for their operations. However, the war has destabilized this, and miners are looking toward places with cheaper energy costs to set up operations.

Mostly, the public bitcoin miners have suffered massive blows due to the decline in bitcoin prices. A good number of them have had to sell off their BTC holdings just to have the cash flow to keep their operations going, and for the last three months, some of them have been selling more BTC than they were producing.

In a bid to reduce their operation costs, bitcoin miners are now looking toward more energy-efficient machines. That is if they were not able to find cheaper energy options. One of the machines that have grown in popularity among the miners is the Antminer S19 series. However, even this does not provide the cost-saving that miners would require to keep going.

In the end, it remains in the best interest of miners to find cheaper electricity. But with China banning crypto mining and destabilization in Russia, US states such as Texas have begun offering attractive energy prices in a bid to pull more bitcoin miners to the region.