If A Recession Is Imminent, Consider Gold And Bitcoin


There’s no way of knowing for certain whether a recession is imminent, but for many Americans, it’s sure starting to feel that way.

According to Google, more people in the U.S. searched for the term “recession” than at any other time in the past two years. 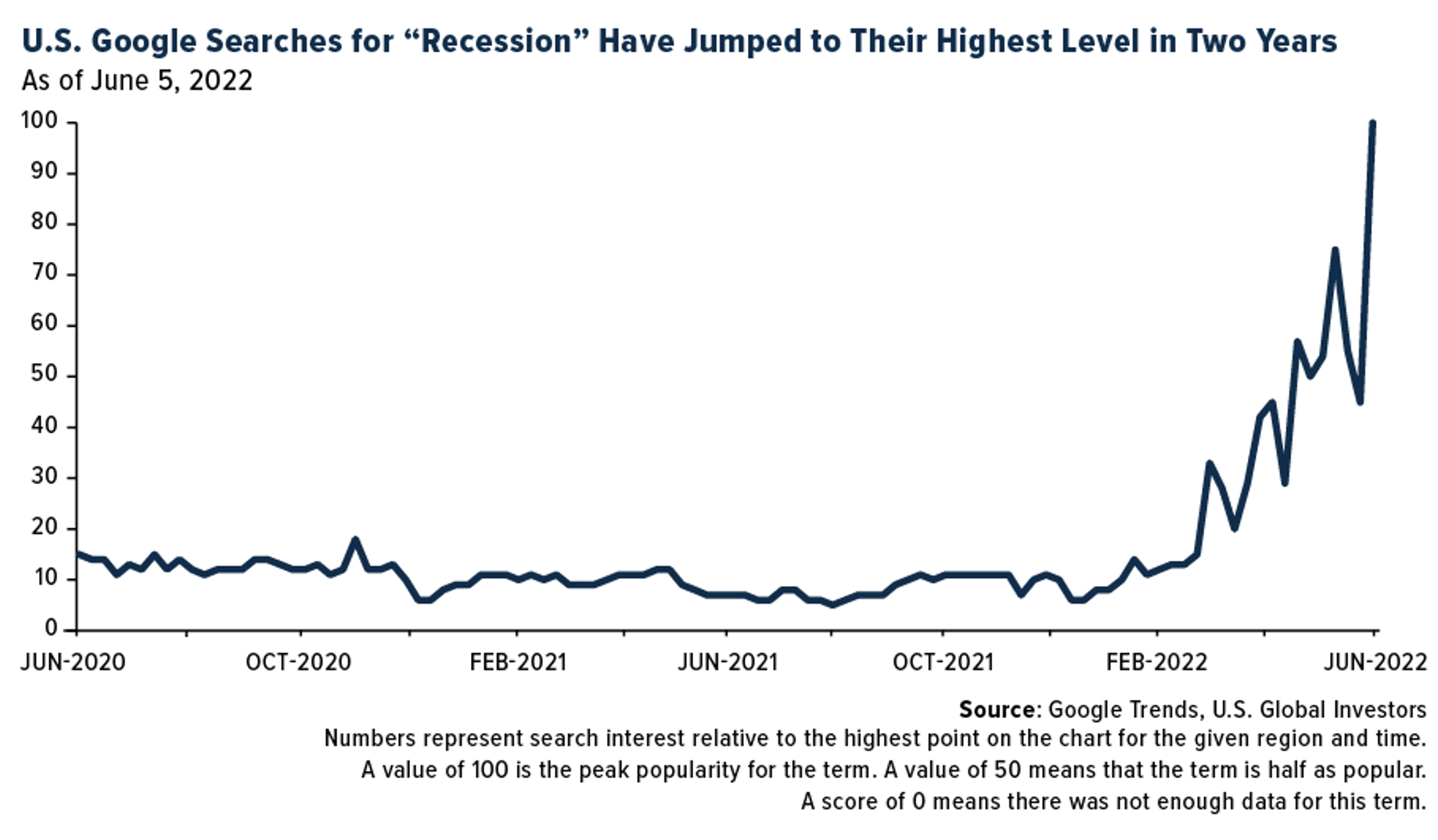 This was the case even before last Thursday’s report showing that inflation rose at a scorching annual rate of 8.6% in May, the highest reading since 1981. If we’re measuring inflation using the 1980s methodology, though, the figure is closer to 17%.

The CPI report followed dreary economic projections by the World Bank and Organization for Economic Co-operation and Development (OECD), both of which see growth being kneecapped by the conflict in Ukraine, which, in turn, has caused the price of nearly every global commodity – from coal to wheat to oil – to skyrocket. Russia and Ukraine together account for about 30% of the total world wheat exports, according to the OECD, suggesting the price of food may remain elevated for a longer period of time than initially expected. 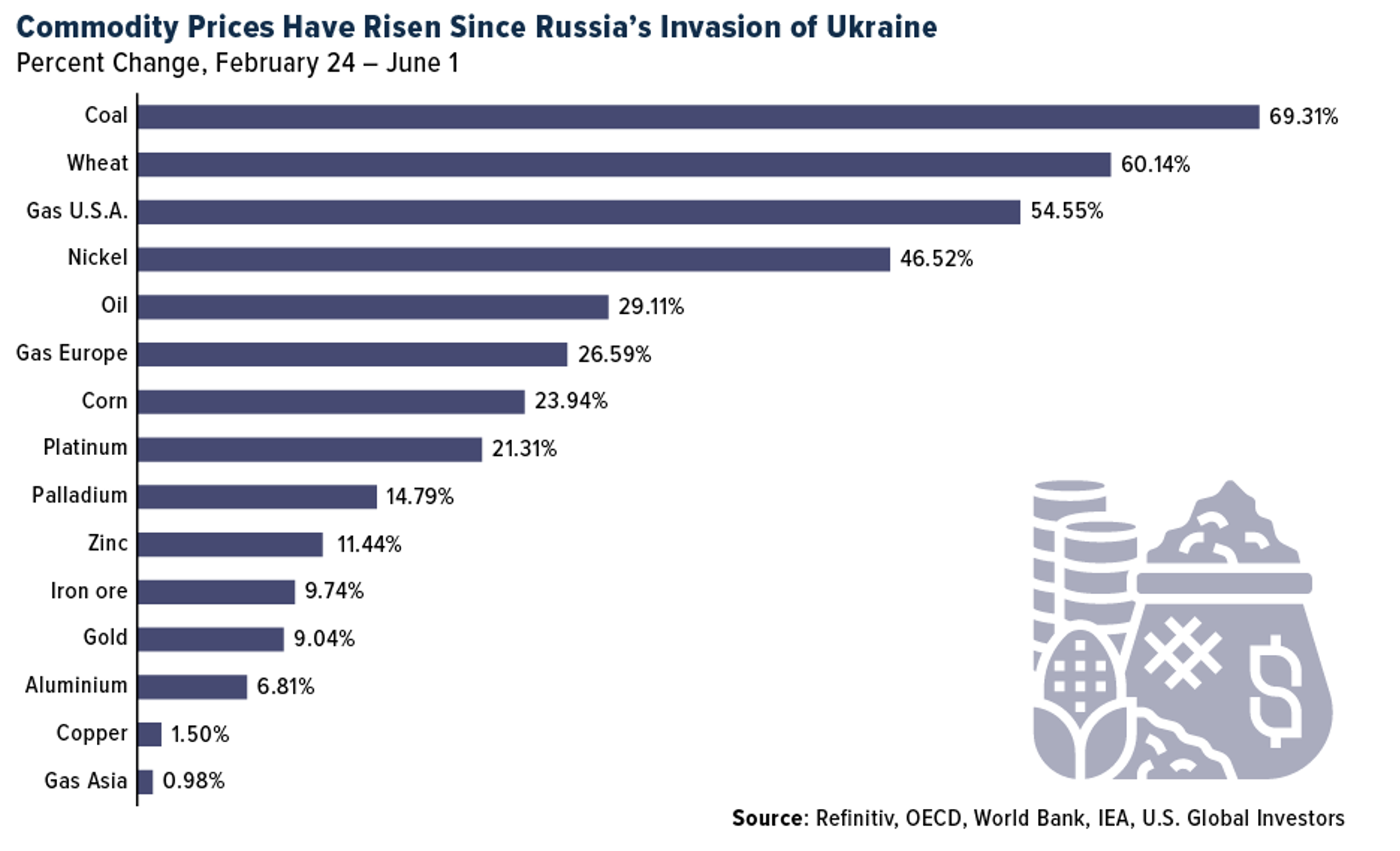 In its flagship June report, the World Bank significantly slashed its earlier global economic growth projection of 4.1% in 2022 to 2.9%. “For many countries, recession will be hard to avoid,” says World Bank president David Malpass. Other countries could be looking at 1970s-style stagflation, the toxic result of highly elevated inflation and unemployment.

The OECD’s forecast, while not so dire, nevertheless sees growth subdued on account of supply-chain disruptions caused by the conflict in Ukraine.

If we are indeed headed for a slowdown, and if it’s triggered primarily by a commodity price shock, it might make sense to price a key commodity—gasoline—in , and stocks to see which one has been the best at offering protection from rising prices over time.

I got this idea, in fact, from the St. Louis Fed, which posted a surprising blog this week in which it compared the price of a dozen eggs priced in the U.S. dollar versus eggs priced in Bitcoin. The reason for doing this was to show that, although Bitcoin may buy you more eggs in the long run than the dollar, its value is much more volatile. (The blog post fails to mention, however, that the U.S. dollar has lost nearly all of its purchasing power since the Fed was created a little over 100 years ago.)

The average cost of gasoline in the U.S. is now above $5 a gallon for the first time ever. But what if it were priced in gold, Bitcoin and the S&P 500? Below you can see the results. 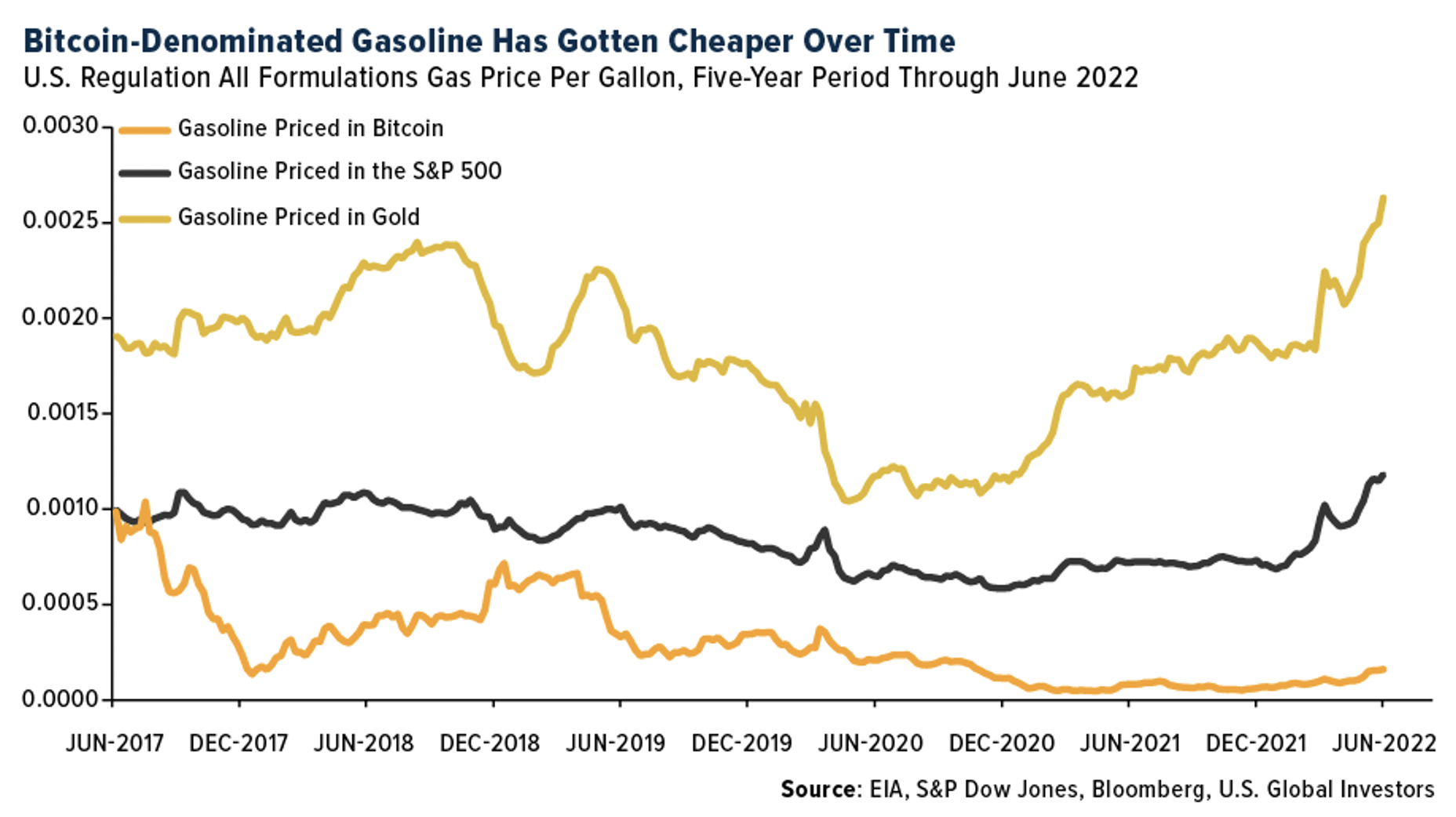 This may appear to show that Bitcoin is better than stocks and gold at providing cover from the effects of higher commodity prices. But there’s a few considerations to make before moving everything into the digital asset.

The biggest consideration is that stocks and, to a much greater extent, gold have been around a lot longer than Bitcoin. They have a track record of how they performed in times of high inflation, high interest rates, and everything in between.

Bitcoin, by comparison, has only been around for 13 years. If it were a person, it would just now be starting puberty. Since being created, rates haven’t been above 2.5%. We simply don’t know how its price action will perform in a high-interest rate environment.

That’s why I often say that gold is ideal for older investors who seek a tried-and-true defensive position, while Bitcoin is ideal for someone who has a longer retirement horizon and who wants a more aggressive asset.

All opinions expressed and data provided are subject to change without notice. Some of these opinions may not be appropriate to every investor. By clicking the link(s) above, you will be directed to a third-party website(s). U.S. Global Investors does not endorse all information supplied by this/these website(s) and is not responsible for its/their content.